The Maverick is bringin’ it back for us one more time – way back – Bible style. John McCain’s campaign has released a sequel to an original ad they created a few weeks ago that’s been making waves since we first saw it. Maybe you know “The One.”

At first, it’s a puzzling message. McCain’s campaign imagery likens Barack Obama to Moses and portrays his popularity as a religious revival. So far, all of the campaigns’ religious rhetoric has been unbelievable – but “The One II” is awful.

Interfaith Alliance has been calling it for months. The candidates’ unholy religious rhetoric pulled us through a primary that often seemed more of a race for Pastor-in-Chief than Commander-in-Chief.

Our video on the Top Ten Moments in the Race for Pastor-in-Chief features Obama soliciting prayers that he might help “create a kingdom right here on earth” and McCain claiming he thinks our Constitution established America as a “Christian Nation.”

When McCain’s campaign released its original “The One” ad comparing Obama to Moses, any notion of its absurdity quickly parted when pundits suggested it portrayed Barack Obama as the Anti-Christ. “An Anti-Christ Obama in McCain Ad?” asked Time Magazine’s Amy Sullivan.

When did we enter a political era in which it’s acceptable to consider if a candidate’s credentials meet supernatural criteria? Are we seriously having a political conversation about the possibilities of biblical manifestation by a presidential candidate?

McCain’s ads comparing Obama to the Anti-Christ would make more sense – or at least be less offensive – if someone were already out there comparing Barack Obama to the messiah himself. 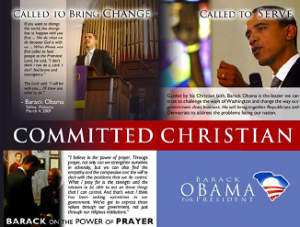 Enter: Barack Obama. Starting in the early primaries, it seems as if Obama’s campaign has been portraying him as prophetic. Obama’s “Committed Christian” campaign materials appeared in a Salon.com article way back in January. Obama’s website now has an entire section about him being a “Committed Christian.”

If religious identity politics have taken us to a time when we – when anyone – will follow a Christ vs. Anti-Christ candidate comparison to elect our next President, maybe it’s time to pause and evaluate our priorities.

Interfaith Alliance’s 5 Questions for every political candidate offer you a way to ask your candidates running for every level of political office about their positions on religion and politics – and gives the candidates a chance to tell us just how close to Christ they really want to be.

We want to know from everyone running for office:

This week, connect with Interfaith Alliance President Rev. Welton Gaddy online for his StateofBelief.com DNC Challenge to help watch the role of faith at the Democratic National Convention. Next week, we’ll be watching the Republicans.

Being a public figure doesn’t mean you have to deny your beliefs. But as religion plays an increasingly prominent role in American politics, preserving the boundary between religion and government is more vital than ever. We can have both.

In a country with more people from more religions than anywhere else in the world, it’s time we get back to what strengthens our most vibrant communities – and stop focusing on who’s hell the candidates might send us to if they’re elected. Mine, for one, doesn’t exist.

This site uses Akismet to reduce spam. Learn how your comment data is processed.