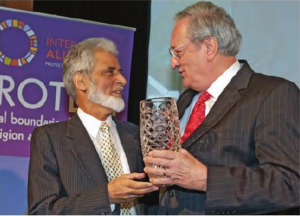 Seeing a growing threat to minority faith traditions in America’s new political makeup, the American Jewish Committee and the Islamic Society of North America have just launched the Muslim-Jewish Advisory Council. We’ll hear about the religious persecution and discrimination the council will be fighting against from Dr. Sayyid Syeed, National Director for the Office for Interfaith & Community Alliances for ISNA .

Also, as we learn more about the people the president-elect is plans to bring to the White House, we’ll get some background from investigative journalist Sarah Posner. Sarah has done invaluable first-person reporting on alt-right hero Steve Bannon for Mother Jones Magazine.

And a compelling new campaign urging families to discuss crucial end-of-life decisions with loved ones. We’ll hear about The Conversation Project from the Rev. Rosemary Lloyd.