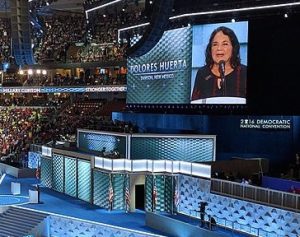 Legendary Latina civil rights organizer Dolores Huerta. From her early days with Cesar Chavez to her work with People for the American Way Latinos Vote! campaign this year, it’s a conversation you don’t want to miss.

We’ll ask activist and filmmaker Valarie Kaur about her participation in the Together Community Tour, featuring inspiring women leaders bringing a message of hope and revolutionary love in a very troubled time.

Welton will also talk with cognitive linguist George Lakoff, the “father of framing,” about the role language and archetypes have played in this year’s political campaigns. A brand-new updated edition of his  groundbreaking book Moral Politics: How Liberals and Conservatives Think, has just been published in paperback.

And we’ll get A Prayer for the Election Season from the Rev. Debra Haffner.